27 Another life in Another World 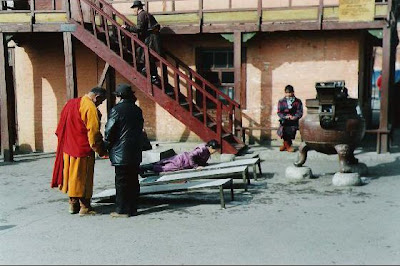 “How did you know Jack?”

“My best friend at school used to go out with him.”

Tom thought back to the time when his brother was still alive. It seemed like another life in another world now. He wiped his eyes with the back of his hand.

Daphne’s smile faded. She had been going to say, “Bit of a ladies’ man, was he?” But thought better of it. She sighed. “Such a tragic loss of life.”

Tom stared ahead at falling snow picked out by the headlights, nodded and mumbled a barely discernible, “Yes.”

The Range Rover turned into a dark lane. Tom couldn't swallow. His throat felt dry. He knew they were nearly there.

The frozen gravel crunched beneath the car wheels as they stopped in front of the embassy. Daphne took both hands off the steering wheel, pressed them hard against her breasts and took a deep breath. Tom watched her bare hands. He could see traces of blue veins throbbing beneath her white skin. Her fingers were all arched upwards with tension.

They opened the car doors and stepped out into the cold night. There was no moon; only the candles flickering inside the embassy broke the darkness. Daphne turned her key in the lock and pushed open the front door. Tom smelled burning candle smoke as his shadow danced in front of him with Daphne’s. They felt their way along the corridor, their fingers brushing against the rippled wallpaper.

Daphne led the way into the kitchen where three candles dripping wax onto saucers either side of a sink filled with dirty crockery illuminated their path to the back door.

As she led him out into the back garden, Tom's eyes looked just above the back of Daphne’s green boots. He hadn't noticed the firmness and muscularity of her legs before.

He followed her into the Steppe Inn. The ambassador stood behind a bar lined with candles, which gave his long, gaunt face a ghostly appearance.

Olof , Gerald and the Lockeys were huddled together in front of the bar, glasses in their hands.

“Hi Olof, Gerald..” He hesitated before nodding to Jim Lockey and smiling faintly at his wife, Jenny. Jim’s freshly-shaven face shone in the candle light. The smell of his Old Spice aftershave dominated Jenny’s flowery perfume

“So what have you been up to this week, young man?”

Tom really didn’t want to speak to Lockey, but shrugged and said, “Nothing much.” Then added, “What about you?”

Jim Lockey’s eyes widened. He quaffed back a mouthful of beer from his pint glass, swilled it around in his mouth, gulped it down, placed the glass back down on the bar, exchanged looks with the ambassador and answered in a slightly-raised voice, “Embassy business.”

Olof broke the tension. “What would you like to drink?”

“That’s very kind of you. A pint please.”

The ambassador pulled the beer pump, handed Tom his drink, then turned round and poured himself a malt whisky.

Olof raised his glass. “Cheers.” He looked at Tom through his big, black-framed spectacles. “There’s been some trouble in U.B, I hear.”

“Clashes between anti-government demonstrators and the army; people being arrested. Have you seen anything?”

Tom thought before answering, “Not much.”

Olof added, “Well, I haven’t seen anything. I’ve been working out at the site all week.”

“What exactly is it that you’re building out there?”

Gerald pushed his spectacles up and chuckled. “You’d never believe it.”

Jim stepped forward until his face was just a few inches from Tom’s. “I’ll show you to the library. You’d like that, wouldn’t you?”

Two thoughts bolted into Tom’s mind: money; integrity. He chased them away. Everything was clear to him now.