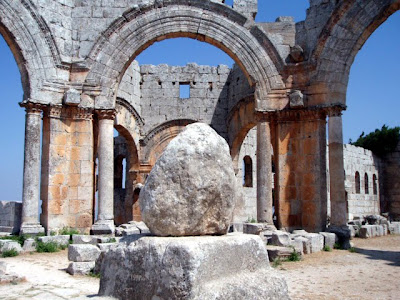 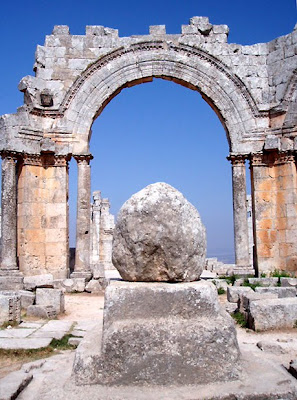 In north-west Syria, about halfway between the Turkish city of Hatay (Ancient Antioch), where the Christian religion was founded, and Aleppo, home of the Great Mosque, where you can see the head of Zachariah, King of Israel and father of St. John the Baptist, you will come across a large stone boulder surrounded by the ruins of a vast cathedral. This rock on a pedestal is all that remains of an eighteen-metre high stone pillar that a man, who at the end of the fourth century was one of the most famous in the world, lived on top of for thirty-seven years. This still stands as the longest endurance record in the Guinness Book of World Records.

Simon Stylites, or Saint Simeon, was, like so many men at that time, the son of a shepherd, who gazed skywards looking for answers. At first he entered a monastery, where he subjected himself to increasingly extreme fasting and ever more masochistic self-abasement. When it was discovered that he had bound his waist so tightly with palm fronds that it took days of soaking to remove the fibres from the festering wound, he was asked to leave the monastery.

At first he imprisoned himself for one and a half years in a tiny hut on a rocky ledge, where he passed the whole of Lent without eating or drinking, a feat hailed as a miracle. When he emerged, he stood upright as long as his limbs could sustain him. One day he discovered a stone column left by the Romans and decided to stand on top of it. This first pillar was only four metres high, but Simeon sought out ever higher columns until eventually he discovered the eighteen-metre high one on top of which he was to spend the rest of his life. His fame spread throughout the western world and thousands of pilgrims from as far away as England and Ethiopia started trekking towards this stone pillar to stare up in wonder at Simon Stylites. Simeon eventually died on September 2, 459 AD, and the great cities of the Byzantine world, including Constantinople and Antioch, fought for the privelege of being his final resting place. Antioch prevailed.

A great basilica was built around Simeon's pillar which fanatical pilgrims chipped away at until it was reduced to the two-metre stump you see today. Simon Stylites spawned imitators and soon there were hundreds of stylites standing on pillars across the Middle East and Europe. In the early twentieth century the practice of pole-sitting was revived in America by poor people and showmen, desperate for a little fame and the money that went with it. In Baltimore, in 1929, twenty children sat on top of eighteen-foot hickory poles, cheered on by their families, while in Atlantic City, in the same year, Alvin 'Shipwreck' Kelly, a showground boxer brought up in an orphanage in Hell's Kitchen, who'd been sitting on poles, on and off, since 1924, set a modern record by sitting on top of a flagpole for 49 days.

The Roman Catholic Feast Day of St Simeon Stylites is celebrated on January 5th each year. In 1965 a film based on his life, Simón del Desierto, was made by Luis Buñuel, and as recently as 1971 a statue of Saint Simeon was erected in the centre of the town of Grimsby in England.

The way you react to this will, in all probability, reflect your views on life, death and the hereafter. Personally, I think you are more likely to find a camel passing through the eye of a needle than a rich man living at the top of a pole.