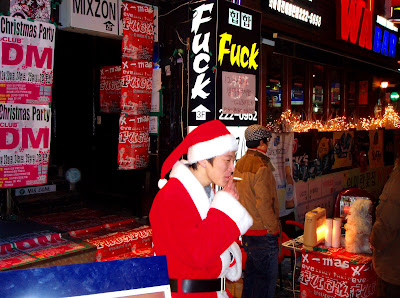 In 1644 an Act of Parliament was passed banning Christmas in England. All aspects of the celebration were made illegal, including the display of holly, ivy and Christmas decorations, and the consumption of typical Christmas fare, including mince pies and Christmas pudding. The ban came about because Cromwell's Puritan regime took a dim view of the Christmas mass, which they saw as a relic of Roman Catholicism, as well as the secular excesses of the Christmas feast, which included dancing, singing, eating huge meals of roast beef, plum porridge and minced pies, and drinking gin and special Christmas ale, all of which were often accompanied by gambling, drunkenness and promiscuous behaviour. To enforce the ban, soldiers were ordered to patrol the streets of London to make sure that no shops or businesses closed for a holiday, to arrest anybody caught celebrating Christmas and to seize any special Christmas fare.

You'll be pleased to know, the ban was lifted in 1660 but, eating mince pies and Christmas pudding is still illegal, as the laws remain unrevoked, so, technically, the police could seize your mince pies or even your Yule log if they wanted to.

England is not alone. I was once an outlaw Santa Claus in Saudi Arabia, where the public celebration of Christmas is still not allowed. Bizarrely, the Santa Claus outfit had to be collected from a Saudi princess's palace, where it was less likely to be seized by the authorities. When the Live Aid record 'Do They Know It's Christmas' was released to raise money for famine victims in Africa, the headline in the Arab News, ironically, read, "Do They Know It's .................?' Best-selling Record of All Time." This was because even publishing the word 'Christmas' could result in a newspaper being closed down and its editor being arrested by the Saudi religious police.

Merry Christmas everyone, and take care nobody finds out about your illegal stash of mince pies.