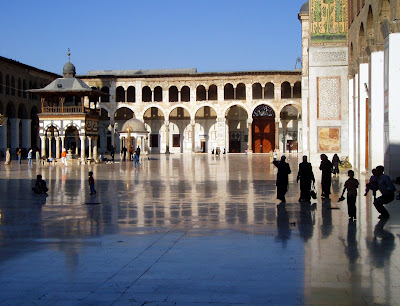 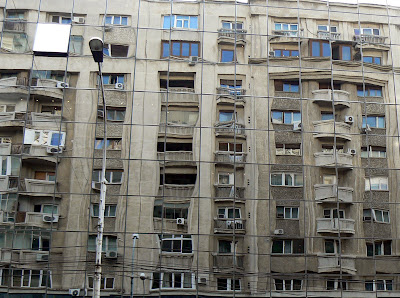 These are photos from two countries I've lived in recently: Syria and Romania. The first is of the Umayyad Mosque: one of the holiest sites in the Islamic world. It stands on the site of a 3,000-year-old Aramaean temple, referred to in the Old Testament. At the heart of it is a beautiful courtyard in which are three domed structures: the Dome of the Treasury, the Dome of the Clocks and the Ablutions Fountain. The mosque has three towering minarets: the Minaret of the Bride, the Minaret of Jesus and the Al-Gharbiyya Minaret. It is here that muslims believe Jesus will descend to earth again to save the world.

Three of the most important shrines in the Middle East are here. They are the shrines of Hussein, St. John the Baptist and Saladin. The head of Hussein the grandson of the Prophet Mohammed, was brought here after he was killed, aged 54, from the Battle of Karbala in 680 AD. The head of St John the Baptist is also enshrined here, beneath a dome. This is reputedly the same head that was presented to Salome on a platter. Although Saladin, the most famous muslim general in the battles of the Crusades, was a Kurd born in Tikrit, he died in Damascus in 1193, and is buried here. I must say that it is quite an experience to see the tombs of three such famous historical figures in such close proximity.

22 years ago, Romania experienced what Syria is experiencing now: a revolution. What you see there today is the legacy of the past - the grim apartment blocks and grey ministry buildings - combined with architectural visions of the future.